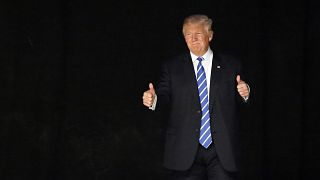 President Donald Trump scored a cinematic nomination on Sunday — for the worst "actor" of 2018.

The Golden Raspberry Awards, or Razzies — which honor the worst performances and movies of the year — singled out the president in its 39th annual awards for appearing as himself in two documentaries, Michael Moore's "Fahrenheit 11/9" and Dinesh D'Souza's "Death of a Nation."

In May, Trump pardoned D'Souza, who pleaded guilty in 2014 to campaign finance violations in New York. Donald Trump Jr. later co-hosted the premiere of "Death of a Nation" — which compares Trump to Abraham Lincoln — in Washington D.C.

Melania Trump, also appearing as herself, was nominated for "Fahrenheit 11/9."

The Razzies, which were created in 1980 by a Los Angeles-based copywriter, will be held on Feb. 23 — the day before the Oscars.

2019's Oscars are revenge for the Academy's diversity efforts | View

'Devastating': EU student numbers in UK drop by half since Brexit