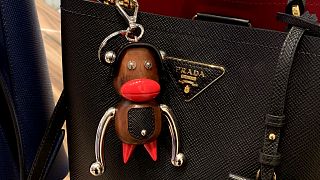 Prada is being accused of blackface and racism for its monkey-like trinkets.   -   Copyright  Chinyere Ezie
By Rheana Murray  with TODAY Lifestyle  •  Updated: 15/12/2018

Prada is pulling a collection of products after the designer brand was accused of racism.

A lawyer in New York City called out the offensive monkey trinkets and window displays after spotting them at one of the company's Manhattan stores, describing them as "racist and denigrating blackface imagery."

"I entered the store with a coworker, only to be assaulted with more and more bewildering examples of their Sambo like imagery," Chinyere Ezie, an attorney for the Center for Constitutional Rights, wrote on Facebook.

"When I asked a Prada employee whether they knew they had plastered blackface imagery throughout their store, in a moment of surprising candor I was told that *a black employee had previously complained about blackface at Prada, but he didn't work there anymore.*"

In a statement, the luxury company said it "never had the intention of offending anyone," but did not apologize.

"Prada Group abhors racist imagery," the company said in the statement, posted on Twitter. "The Pradamalia are fantasy charms composed of elements of the Prada oeuvre. They are imaginary creatures not intended to have any reference to the real world and certainly not blackface."

The company also said it will "withdraw the characters in question from display and circulation."

The products reminded many of the blackface characters from the Jim Crow-era minstrel shows.

After her initial post, Ezie shared a photo of the same store with its windows covered in paper.

Yet many fashion fans weren't pleased with Prada's response.

"Fantasy charms my a--," one person wrote on Twitter. "It's #Blackface plain and simple, and your attempt to justify it is a great insult and minimizes your effort in an apology @Prada."

"How they could not have seen the problem before it became a problem is beyond me," another wrote on Facebook.

Or, as New York City Councilman Jumaane Williams said in a video he shared on Twitter, "Who the hell approved this?"

It's not clear if other Prada stores took down similar displays.

Both Williams and Ezie are urging people to boycott Prada.