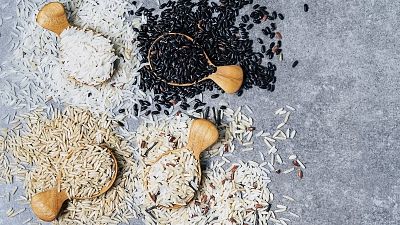 Rice is a staple ingredient in an endless array of recipes and it's found in millions of pantries around the world, but not all types are created equal — and with so many varieties available on store shelves today, it can be a little confusing about how to decipher which variety of the grain is best.

Eating brown rice, for example, is a great way to meet your daily whole grain needs. Studies have shown that whole grains are a longevity food that can help extend our healthy years andlower cholesterol. The Dietary Guidelines for Americansalso recommends that adults eat three to five servings of whole grains every day.

But trendy eating plans, like the high-fat, low-carb ketogenic diet, have put rice on the naughty list. Dr. Steven Gundry's best-selling book, "The Plant Paradox," whichKelly Clarkson attributed to helping heal her thyroid issue and promote weight loss, points a finger at lectin. In his book, Dr. Gundry calls lectin (which is not to be confused with the phospholipid lecithin) a "highly toxic, plant-based protein" that can lead to autoimmune disorders, diabetes and weight gain.

It's common in fruits, vegetables, nuts, beans, dairy and ... you guessed it, rice.

However, there's no need to cross off every lectin-containing item (including rice) from your grocery list.

"Lectins are plant proteins that have been associated with both health boosts and negatives. This is not cause and effect. Eating raw lectins can cause an upset stomach — but who is eating uncooked beans? You're likely to break a tooth first," NBC News health and nutrition editor Madelyn Fernstrom told TODAY Food. "Cooking breaks down lectins, so the problem is resolved. Lectins have also been associated with health positives, like boosting the healthy bacteria living in the digestive track."

While the "Plant Paradox" diet may have worked for devotees like Clarkson, chef Sabrina Sexton, who served as the program director at the Institute of Culinary Education in New York City, told TODAY Food that Gundry's findings go against "generally accepted, scientific evidence" that healthy foods like fruit and rice are good for us.

Fernstrom agrees with the chef.

"While Dr. Gundry is entitled to his views, no other scientific or medical professional views lectins to be the 'toxin' that he does," Fernstrom told TODAY, adding that it's also wise to be aware when doctors are recommending a plan for which they also supplements, as it "raises a red flag for credibility."

So, lectins aside, when we're looking to get our recommended fill of whole grains, which rice is best? According to Harvard's T.H. Chan School of Public Health, brown rice is not only an affordable option but it's also rich in fiber, vitamins B1 and B6, magnesium, phosphorus, selenium and manganese.

But when it comes to finding the best rice for certain dishes, brown may not always be best. Here's a closer look at four of the most popular types of rice on the market and how to serve them.

Brown rice gets its name from the color of the grain. It is a whole grain, which means it is made up of all three essential, unprocessed components of the original grain: the bran, germ and endosperm.

"Brown rice is the more healthful choice [than white rice]. It has a lower glycemic index, [which means it] is less likely to contribute to type-2 diabetes, more micronutrients and more fiber," Sexton said. "It also has a better, slightly nuttier taste and chewier texture."

Brown rice makes a great base for hearty grain bowls(the higher fiber content will help you feel fuller longer) as well as in dishes where a slightly nutty taste is appreciated, like a pilaf with roasted veggies. While brown rice can be substituted in almost any dish where white rice is used, it's important to note that the cooking time will need to be adjusted since brown rice takes a little longer to cook. Brown rice is not a good choice for dishes like puddings or risotto, however.

Don't let this deeply colored rice intimidate you. Black rice (also known as "forbidden rice"), along with purple and red rice, is just like brown rice in that it is an unprocessed grain so it maintains a lot of its nutritious value.

In addition to the fiber, vitamins and minerals, the deep hues of these grains actually makes them healthier. Similar to blackberries and wild blueberries, the pigment comes from a plant phytochemical called anthocyanins and it's filled with antioxidants.

"Puddings and desserts are the way to go with black rice," chef Frank Proto, an instructor at the Institute of Culinary Education, told TODAY Food. "It looks beautiful because of the color and it also gives a creamy texture."

On its own, the rice has a slightly nutty flavor akin to brown rice so it's also a great base for savory toppings.

Wild rice isn't actually wild in the traditional sense. Fernstrom told TODAY Food that "wild rice is not wild, and it's not rice. It's the seeds of edible grasses found in North America."

This "rice" is a healthy choice for people to looking to add some nutritious texture texture to salads or other sides because it holds up well when sauced. According to Fernstrom, a 1 cup serving of wild rice has about 50 fewer calories than brown rice and 10 fewer grams of carbohydrates. It also provides more zinc, folic acid and vitamin E than brown rice.

"It is perfect for salads and pilafs because it is a bit on the heavier side and tends to hold up well," Proto told TODAY Food. That heaviness, however, may overpower certain dishes where a hardier texture isn't desired.

So while brown rice may get most of the credit as being the most nutrient-rich rice, wild rice has a host of great benefits that shouldn't be ignored.

White rice may be the least nutritious of the most popular rices but it's incredibly versatile. According to Harvard's Nutrition Source, white rice varieties are refined grains, which means it starts off just like brown rice but then the bran and embryo are polished off so only the "starchy white endosperm" remains. In the process, the majority of the grain's B vitamins, minerals and fiber are are also removed.

When a rice label says "enriched," that means B vitamins and iron have been added back in — so the grain is not completely devoid of nutrients, but it only has a fraction of what occurs naturally.

However, there's no need to shun white rice all together. Many white rice varieties work well for plethora of dishes like fried rice, jambalayaand more.

"If fiber and whole grains are consumed from other foods [such as] whole wheat bread, fiber rich fruits and veggies, then white rice can be incorporated into a healthy diet," Fernstrom told TODAY.

Another variety of white rice, jasmine rice is beautifully fragrant and makes a perfect base for many Asian dishes with rich, savory sauces. And the starchiness in white Arborio rice is unmatched for making creamy risottos loved by Italian chefs like Giada De Laurentiis.