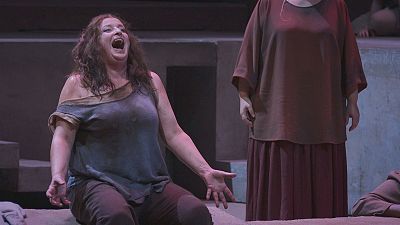 The opera house revived the famous production to mark the fifth anniversary of the director's death.

The New York Times gave it a fantastic review in March this year.

German soprano Ricarda Merbeth's debut is in the title role, giving a heart-wrenching performance. "What fascinates me about Elektra is, of course, the vengeance," she told Euronews. "These thoughts of taking revenge, which she already has in her monologue. It's a huge palette of emotions that Elektra is going through."

Vengeance is at the heart of Strauss’ relentless one-act opera from 1909. Drawn from Greek tragedy it tells the story of Elektra who seeks revenge on her mother for murdering her father.

"Essentially it's a tragedy that one murder will lead to another murder," explains conductor Christoph Von Dohnanyi. "And this is probably the reason why we can feel and understand this woman, why she has an obsessive compulsion and this obsession is to kill the murderers of her father."

One pivotal moment is the reunion scene, where Elektra recognises her long-lost brother Orest, portrayed by German baritone Michael Volle.

"She's been waiting for him all this time. And finally he has arrived and now she wants him to kill them and to take vengeance as she has planned," said Merbeth.

Volle described the poignant scene: "Despite this threatening and bloody destiny it's an incredibly tender moment, and the music of Strauss makes it easy to just let go."

"He was, according to Daniel Barenboim who worked with him a lot, says even though his background wasn't musical. Chéreau was incredibly inspired by music from the most complex opera's such as, 'Tristan und Isolde', 'Wozzeck', 'Elektra'," said Volle. "Because he was a man of the stage, of expression, he was a universal artist, a genius and he had so much to say, he created an atmosphere that didn't need anything opulent."

Merbeth adds, "The end of Elektra is a dance like in the monologue. She really wants to dance one more time and then die. "Patrice Chéreau wanted this particular movement. From the need to dance but not being able to, she falls into this endless emptiness."