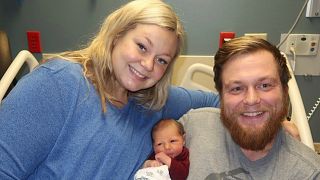 Copyright  Courtesy of Ashley and Andrew Goette
By Scott Stump  with TODAY Health and Wellness  •  Updated: 27/10/2018

Ashley Goette woke up a day before she was scheduled to be induced into labor with her first child to find her husband unresponsive and gasping for air in their bed last week.

It marked the harrowing beginning to a four-day roller coaster in which she helped save his life and then gave birth to their son.

"Within a four-day span, she saved a life and she brought a new life into the world - that's amazing," Dr. Alex Teeters, a pulmonary and critical care physician who treated Andrew Goette at United Hospital in St. Paul, Minnesota, told TODAY.

"It's nothing short of a miracle,'' Goette, 28, told TODAY. "I went from the brink of death to being able to watch the birth of my son. It will be one heck of a story to tell him when he's older."

Ashley, 28, initially thought Andrew was snoring at 5 a.m. on the morning of Oct. 16 at their home in St. Paul. Then she realized he was actually struggling to breathe.

The elementary school teacher's aide called 911, and the dispatcher talked her through giving him CPR until the paramedics arrived.

"Her starting the CPR as soon as possible was really key in the outcome,'' Teeters said.

Ashley had gone from anticipating the birth of their son to wondering if she was going to have to raise him alone.

"When (the paramedics) were standing in the house and doing CPR, I was thinking, 'I cannot have this baby and not have Andrew be here,''' Ashley told TODAY. "That was going through my head all day."

Andrew was taken to United Hospital, where he was put in a medically-induced coma. His body was chilled to 91 degrees for 24 hours to in an attempt to prevent damage to his brain.

Doctors discovered that Andrew had been born with Wolff-Parkinson-White syndrome, a rare condition in which an extra electrical pathway in the heart causes a rapid heartbeat.

"We started preparing the family that this might not turn out well. It could've gone either way."

Relatives began arriving at the hospital thinking they were going to say goodbye. Ashley cancelled her Oct. 17 appointment to be induced into labor at a different hospital and sat by his bedside hoping he would survive, even if he suffered brain damage.

By 1 p.m. on Oct. 17, doctors had warmed his body back to normal temperature and taken him off the sedatives. His father saw him move his shoulder, and then the nurse asked him if he could open his eyes.

"Then he just sat up and opened his eyes,'' Ashley said. "I was on his Spotify looking for songs he likes to try to spark brain activity, and all of a sudden he's awake. I just dropped everything and I was just telling him he was OK because he looked so scared and confused."

Doctors cauterized the extra pathway in his heart. He has to wear a vest for the next three months that monitors his heart and can shock it back into rhythm in case of any problems.

"For the most part, I made it out unscathed,'' he said. "I'm just really lucky."

About 24 hours after Andrew woke up in his hospital bed, Ashley was induced into labor on a different floor at United Hospital. Their son, Lennon, known as "Lenny," was delivered after 22 hours of labor at 5:16 a.m. on Oct. 19 via C-section.

Andrew watched the procedure on FaceTime through Ashley's sister's phone.

"I think it probably still hasn't completely hit me,'' Ashley said. "Nothing was going the way we had planned, and after about the 20th thing goes wrong, you start rolling with the punches."

Andrew had been wheeled in his hospital bed into an adjacent room, where he got to hold his son after the birth.

"I took my shirt off right here, put him on my chest and just sat and held him until Ashley got out,'' he said.

Since the couple returned home on Tuesday night, friends and neighbors have been coming over with food and offers to rake the leaves and walk the dogs. They also have set up a GoFundMe page to help the couple with the medical expenses.

"It's just a massive sigh of relief,'' Andrew said. "When we got home, a wave washed over me like, 'Things are looking all right.'''

Ashley's quick response on that morning in their bedroom is a big reason they can now smile and take a breath.

"I feel like I'm given a little bit too much credit here,'' she said. "I feel like Andrew defied the odds by waking up from all of this and being injury-free, and all the credit should go to the doctors, nurses and paramedics. I'm just so happy everyone is home and healthy."