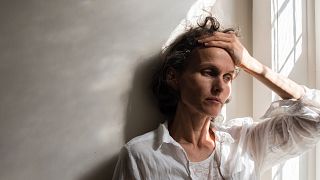 Doctors already knowchronic long-term stress can lead to all sorts of health problems and there's another reason to watch those stress levels: Your memory may depend on it.

Higher levels of cortisol — a hormone released by the body in response to stress — were linked to impaired memory and even slight brain shrinkage in healthy adults in their late 40s, according to a study published Wednesday in Neurology, the medical journal of the American Academy of Neurology. The link was particularly evident in women.

Previous studies have found people with extreme levels of cortisol may have memory problems, said Dr. Justin B. Echouffo-Tcheugui, the lead author and an assistant professor of medicine at Johns Hopkins University.

But the new research shows doctors may need to pay more attention to patients who have much lower levels, he noted.

"We're suggesting that if you have even a small elevation of cortisol, you may end up having some detrimental effects," Echouffo-Tcheugui told TODAY. "In other words, maybe we need to revisit our threshold."

It's another finding showing stress that's not well managed or excessive is detrimental to brain health in the long term, said Dr. Pierre Fayad, medical director of the Nebraska Stroke Center and a Fellow of the American Academy of Neurology.

"Our brains need to be challenged enough to function and be stimulated, but when that challenge is continuous and overwhelming, without a break, it may lead to negative consequences," said Fayad, who was not involved in the study.

Any type of stress will boost cortisol levels in a person's body, which is a natural response, Echouffo-Tcheugui said. It's key in the fight-or-flight response humans have used to survive dangerous encounters with predators for centuries. Everything should return to normal once the threat has passed, but if the stressors of modern life — like work, home, traffic, bills, care giving, social media, family troubles, phones, bosses — never go away, the cortisol stays high.

Over time, this can put a person at risk for health problems including high blood pressure, heart disease, obesity and depression.

For the paper, researchers evaluated 2,231 people who were part of the Framingham Heart Study. The participants, who were 48 years old on average, did not have dementia or any other neurologic conditions. Each underwent a psychological exam and tests for memory and thinking skills. Each had his or her blood cortisol levels checked. Most also had a brain MRI.

It turned out that people with the highest levels of cortisol performed worse on tasks measuring visual perception, executive brain function — like working memory to process information and solve problems — and attention. High cortisol was also linked to lower total brain volume in women, but not in men.

Should women in their 40s take hormones for brain health?

Cortisol is necessary for normal brain functioning, but too much of it will have a detrimental effect, Echouffo-Tcheugui. The authors don't know why some of the findings were more significant in women than in men, he added.

One possible reason may be that because the study involved middle-aged people, many or most of the female participants were undergoing menopause, Fayad noted.

"During menopause, drastic hormonal changes take place, and bodily changes accompany it, which may be a confounder in this study," he said.

The lesson for everyone is to keep stress in check. Since many stressful situations are beyond a person's control, it can be tough to do, Echouffo-Tcheugui said.

It may also be worth asking your doctor about your cortisol levels.

"Stress is an entity or condition that is difficult to define or diagnose," Fayad said. "Everyone responds to stress differently. There are some people who cannot live without stress, while others are paralyzed from minimal challenges."

For good health, it's key is to find what works for you.

Burnout is very real. Here's why some people think it's fake ǀ View