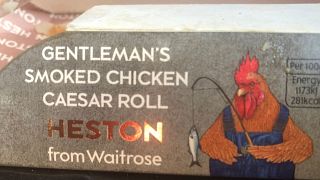 The argument over whether or not pineapple and other toppings belong on a pizza may continue to be a topic of conversation on social media for years to come, but a sandwich is the latest food riling up people.

The point of contention was about whether one specific sandwich is sexist or not — and it ignited an international food fight on the internet.

On Tuesday, Amy Lamé, a London DJ and radio personality, noticed that a sandwich at Waitrose, a popular grocery chain in the U.K., created a pre-made sandwich called The Gentleman's Smoked Chicken Caesar Roll.

Lamé noticed that the name only gave a shout out to males and pointed out its "gender specific" title on Twitter.

The tone was lighthearted but her tweet tagged the grocery store and Everyday Sexism, a project that describes itself as "documenting the experiences of sexism, harassment and assault to show how bad the problem is and create solidarity." Tagging Everyday Sexism added a bit more weight to the her post.

Lamé's tweet then ignited a battle of the sexes ... or sandwiches (you get the idea). It became almost as fiery as the time that people furiously tweeted their thoughts about mayonnaise-flavored ice cream.

One tweeter brought up the names of gendered foods like pink lady apples and lady fingers, then wrote that it's "just food, not a blow to our human rights."

More people jested about other foods and brands with gender-specific titles and said people should move on, especially since Waitrose apologized.

One woman said the name is likely from the use of a spicy anchovy paste called, Gentlemen's Relish, and that it's "hardly sexist."

A man expressed there are "more important" problems to tackle than a "silly sandwich."

There were few tweets in support of Lamé's issue with the sandwich, but some did note that it was a "silly name."

Taking note of the viral debate that started on Tuesday, Waitrose announced on Wednesday that it will be changing the name of the sandwich.

"It's never our intention to cause offence — we're not dictating who should eat this sandwich — we hope anyone who tries it will love the distinctive flavours," a Waitrose spokesperson told TODAY Food by email. "However, we are planning to change the name of the sandwich soon."

The spokesperson did not indicate how the chain will alter the smoky sandwich's title nor whether its namesake is a nod to Gentleman's Relish, as some tweeters suggested.

Here's to hoping they don't go naming it the "Anchovy Paste Smoked Chicken Caesar Roll" ... then they'd be in for yet another uprise.