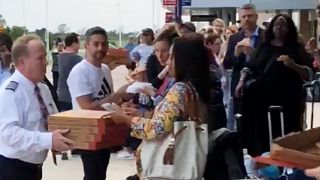 Being stuck on a diverted aircraft is never fun. But what if that flight turned into an impromptu pizza party?

On Sept. 6, American Airlines Flight 2354 from Los Angeles to Dallas/Fort Worth was diverted to a small airport in Wichita Falls, Texas. Due to "severe thunderstorms that impacted" the northern part of the state, a spokesperson told TODAY Food, all 159 of the flight's passengers were forced to stay overnight in Wichita Falls until it was cleared to depart (again) for Dallas/Fort Worth the following morning.

As the large group grew weary, pilot Jeff Raines took it upon himself to calm the travelers' nerves and fill their bellies with Papa John's pizza.

"The Captain of Flight 2354 bought pizza for everybody who was stuck in Wichita Falls Regional airport after a weather diversion. I don't think I've seen this before," a man named Josh wrote in a post on Twitter along with a video accompanying the pilot's kind act. Josh is a family member of the pilot who works at the airport, People reported.

In the video, Raines is seen running from a car holding a large stack of pizzas and handing entire pies out to passengers.

"What a guy," people can be heard saying in the video, which is now going viral on social media.

Some tweeters spoke to the sweetness of the pilot's thoughtful act.

Others applauded the captain for being so "thoughtful."

"Love that," another tweeter wrote.

A spokesperson at American Airlines told TODAY Food that the company is "proud" of its "crew members who take great care of our customers."

And now, the whole world is left inspired by yet another random act of kindness inspired by food.