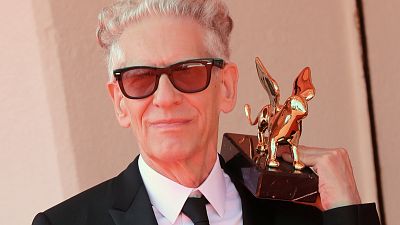 David Cronenberg arrived at the Venice International Film Festival on Thursday to receive a Golden Lion for Lifetime Achievement.

The honour was bestowed upon the Canadian director "in recognition above all of his ability to examine the here and now through languages and forms of cinema."

It's a fitting tribute as both the festival and the director are 75 years old.

On receiving the award, Cronenberg said the Golden Lion statuette, which is in the shape of a lion with wings - a symbol of the city of Venice - represented "the monster of art and of truth."

"Which is something we need now more than ever," said Cronenberg. "And so, long live the monster of art and my it conquer its many enemies."

"Genre definitions became too narrow for him and soon he showed the world that he did not fit neatly onto any shelf, he created his own (genre). David Cronenberg is not a genre filmmaker, he is a genre of a filmmaker," he added.