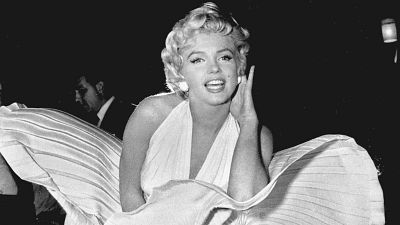 Marilyn Monroe poses over the updraft of a New York subway grating while in character for the filming of "The Seven Year Itch" in New York City. Now, that famous pleated dress is up for auction.   -   Copyright  AP
By Kate Holland  with TODAY Lifestyle  •  Updated: 14/08/2018

For years, historians have wondered how movie star Marilyn Monroe got one of the most iconic stage names in Hollywood. There were legends and rumors, but no one knew for sure.

Profiles in History, the world's largest auctioneer of Hollywood artifacts, is hosting "Essentially Marilyn," an exhibit of MarilynMonroe's costumes and artifacts at the Paley Media Center in Beverly Hills, California, beginning Aug. 18.

Among the items up for auction is Monroe's famous white dress from "The Seven Year Itch" when a gust of wind from the subway below brushes her skirt in an iconic moment. It also includes a never-before-seen, mystery-solving photograph she signed to a Hollywood executive whom she credits with jump-starting her career: Ben Lyon, a former 20th Century Fox executive.

The 14-by-11 inch photograph shows Monroe and Lyon posing together during 1955 filming of "The Seven Year Itch," and is penned with her handwriting.

The photo reads: "Dear Ben, You found me, named me and believed in me when no one else did. My thanks and love forever, Marilyn."

"My favorite item is the Ben Lyon photograph," the CEO and founder of Profiles in History, Joe Maddalena, told TODAY Style. "Legend has always been that he gave her her name, and this photograph confirms that it really is true."

Lyon signed the actress, born Norma Jeane Mortenson and baptized Norma Jeane Baker, to her first studio contract after a series of color screen tests in 1946.

According to Maddalena, this photograph proves he also gave her the stage name "Marilyn Monroe."

"Monroe wrote a letter to a friend saying 'I've got my stage name, it's Claire Norman.' And then she went to dinner with her dear friend Ben Lyon and, legend has it, he said, 'That doesn't work for me,'" Maddalena said.

"He asked her, 'What's your mother's maiden name?' and she said, 'I think it was Monroe.'"

"So Lyon says to her, 'I like Monroe. You know, you've always looked like a Marilyn to me.' And thus, Marilyn Monroe was born right then and there," said Maddalena. "And now we know, this isn't just legend; this is true."

The photograph was authenticated by PSA, a leading autograph authenticating firm.

According to Maddalena, the "Essentially Marilyn" exhibit is the largest Monroe auction since the famous Christie's Auction House sale in 1999.

"What's amazing about this is the sheer quantity of stuff we have going up for auction," Maddalena said. "We have everything you could possibly want — her wedding photo, wedding invitation, her (Screen Actors Guild) membership card, baby photos, everything."

"There are even baby photos where she made little notes on the back. One reads, 'First boyfriend. Lester Bolender and Norma Jeane, both age 5,' in her handwriting, and they've all been authenticated," said Maddalena.

The exhibition will also feature a hand-annotated script from "The Seven Year Itch" and 15 different costumes worn by Monroe, some of which she wore in films "Gentlemen Prefer Blondes" (1953) and "How to Marry a Millionaire" (1953).

"The annotated script of 'Seven Year Itch' is probably my second favorite item up for sale," said Maddalena. "[Monroe] would annotate her scripts in third person, like 'Norma Jeane does this' or 'Norma Jeane acts like Marilyn here in this way.' She was always Norma Jeane to herself. Marilyn was just an actress."

"She really was building a persona and playing this character that was Marilyn Monroe," he said. "Her annotations, she's reminding herself over and over to do what Marilyn would do and asking herself, 'How would Marilyn play this?'"

There will also be a display of large format photographs of Monroe taken by personal friend and fashion photographer Milton H. Greene.

Monroe's artifacts are set to go up for auction at the end of October, but the exhibit is free for public viewing between Aug. 18 and Sept. 30.