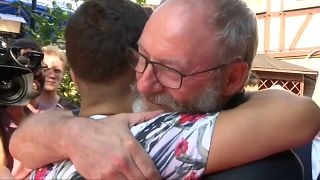 Game of Thrones actor Liam Cunningham was reunited with a young syrian refugee he first befriended in Jordan in 2016.

The actor was there to raise awareness about the plight of refugees. Hussam Al-Heraki is now living in Germany. He has starred in a short film, Halbnah which illustrates the challenges young refugees face in a new country.

Cunningham said Hussam had had a very difficult journey from Syria to Stuttgart and his positivity was incredible.

Hussam Al-Heraki is one of more than five million Syrians who have fled the country since war broke out in 2011.

The short film centrs around a refugee whose new German friends turn on him when they suspect him of stealing a bike. It will soon be available on YouTube.