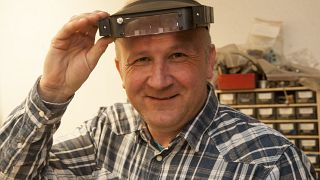 The exterior of one Budapest property looks a bit like a junkyard, with old, ownerless TV sets piled high. However, Attila Ellenbacher's garden is a place of hope, rather than despair. The televisions are stacked there to await repair, and the new lease of life he will give them.

The Hungarian TV mechanic donates the sets he repairs to people who need them, thereby not only reducing waste, but making people happy at the same time. It is this simple initiative that has earned him the title of #Europeanhero.

Attila Ellenbacher explains that "as hotels modernise their equipment, and the TV sets in their rooms, they usually donate 20, 30, 40, or 50 sets. Recently a hotel donated 150 TV sets". For the hotel this resolves the thorny issue of disposal and transport of these heavy unwanted items.

Some of the sets need new parts to become fully functioning again, and Attila is always on the look out for new donors willing to give him the parts for free. To make sure this happens transparently, he established a foundation.

"If everything runs smoothly, TV sets don't end up in the dumpster, we can give them away fixed, and we are given the money needed to fix them," he says.

Many of the repaired sets have found their way to retirement homes, where residents are each given one for their room.

Zoltán Konkoly, the manager of Margarete Retirement home in Budapest says that it's a great initiative because watching TV gives the residents "something to talk about. They usually discuss the news with the carers. Sometimes they are happy about the news, and sometimes they are not. But they don't become isolated from the world outside, and that helps a lot".

If you know a #Europeanhero, please get in touch via europeanheros@euronews.com

The teacher who never stopped learning: our sixth #Europeanhero