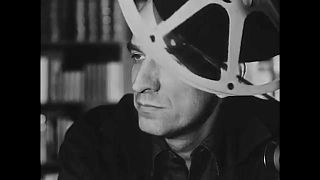 Ingmar Bergman was a Swedish film maker and director, considered to be one of the greatest of all time.

In tribute, German film director Margarethe von Trotta has produced a documentary about his life and work, titled "Searching for Ingmar Bergman".

She speaks to stars of European cinema like Liv Ullmann, Carlos Saura, Olivier Assayas and Ruben Östlund to find out the impact of Bergman on the film-making world.

Magrarethe is one of so many film-makers inspired by Ingmar Bergman, whose work earnt him three oscars and six golden globes for best foreign language film.

He's directed more than 60 films and documentaries as well as 170 theatre productions.

With more than 300 unique performances and a steadily increasing demand, Bergman is not only the world’s most staged film-maker, but also one of Scandinavia’s most performed playwrights globally.

There are various exhibitions being organised around the world to celebrate his 100th anniversary, with further details available on the Ingmar Bergman website.