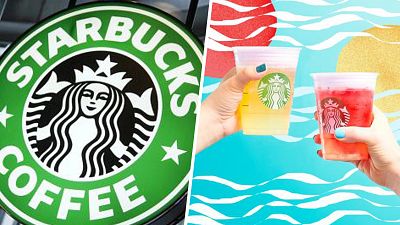 Say goodbye to Starbucks plastic straws for sipping Frappuccinos. Today, the coffee chain announced that it will do away with all plastic straws at its stores worldwide by 2020.

With its pledge, Starbucks became the largest food and beverage retailer to join in on a movement to stop using plastic straws and eliminate waste produced by the proliferation of single-use straws. About a billion Starbucks straws are used every year, according to the company.

McDonald's announced last month that it would get rid of plastic straws in all of its stores by 2019, and in May, IKEA said it would remove plastic items like straws, plates and garbage and freezer bags, both for sale in stores and for use in its restaurants, also by 2020.

Why are plastic straws being banned? Eight million metric tons of plastic straws and other plastic items end up in the ocean every year and are having a devastating effect on ocean species, according to a press release by Starbucks.

So how will customers be able to drink their favorite Frapp? It might take a bit of getting used to, but the chain has designed strawless lids, which it now offers at 8,000 of its stores in the U.S. and Canada for drinks like Starbucks Draft Nitro and Cold Foam. Additional stores, beginning in Seattle and Vancouver, will be getting the lids beginning this autumn.

The strawless lid will eventually become the standard for all iced coffee, tea and espresso beverages. But for those who just can't do without a straw, stores will also offer straws made from alternative materials, such as paper or compostable plastic, which will be available by customer request.

So far, the move has been well-received by some people.

But some pointed out that the company still needs to work on eliminating plastic lids and cups.

MAD Magazine made this quip:

It isn't just about the straw for Starbucks. The company is also working to develop a recyclable and compostable hot cup in partnership with Closed Loop Partners, through the NextGen Cup Consortium and Challenge.

Until the straw and lid changes become permanent, there's another great way to help cut down on waste — and it's a great deal for Starbucks customers. Simply bring in aresuable cup, like the amazing HydroFlask, for a sweet discount.