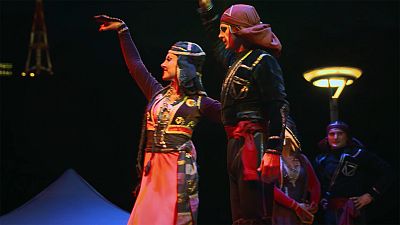 Georgia is known for its natural beauty, fine cuisine, and much more. The National ballet is one of the nation's cultural crown jewels.

It all started out over 70 years ago as a family enterprise, when the husband and wife team of Iliko Sukhishvili and Nino Ramishvili founded the Company. The Ballet has since survived the red terror of Stalin’s Soviet Union, the Cold War and the break-up of the Soviet Union, growing into an internationally renowned company.

The lightning-quick spins and acrobatic jumps of the male dancers impress audiences, young and old. The company has been applauded on the world’s most prestigious stages.

Today it is the grandchildren who carry the torch. Iliko Sukhishvili is the Artistic Director and Choreographer-in-Chief and his sister Nino is Director General and Costume designer.

"You can see during our show the customs, habits, traditions and history of the country. Its all reflected in the dance and movements and Georgian dance is very popular in our country. Actually I don’t know another country in the world where the folk dance is so popular as in my country," says Nino.

David Chanishvili has danced for the company for over 8 years. He trains every day for around six hours before performing on stage in the evening. What is the hardest aspect of Georgian ballet?

"It is very specific to Georgian dance; our male dancers dance on their toes, and they have nothing inside, no protection. It's not like ballet block shoes with points, it's just thin leather boots and they dance on the toes, that’s very difficult."

Only when you try some of the movements by yourself you get an idea of how difficult it is to overcome gravity with elegance. Not everybody succeeds.

The ballet integrates traditional dances and costumes from different social backgrounds, and from various regions of the country.

Some dances from the mountain regions look like real battles or competitions of bravery and courage.

"Isn’t it amazing? You can see the fascinating show of the Georgian National Ballet Sukhishvili at the Rieke Park every Saturday until August the 25th," reports Wolfgang Spindler from Tbilisi, Georgia, for Euronews.

Ballet shoes are pointing to diversity