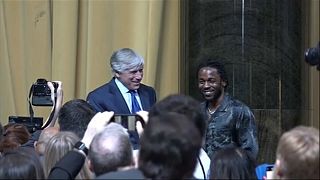 American rapper Kendrick Lamar has made history by becoming the first hip hop musician to receive the prestigious Pultizer Prize for music for his acclaimed album Damn.

In making the award, the album was described as a "virtuosic song collection ... which captured the complexity of modern African American life.”

The album, launched last year, has been a huge critical and commercial succes and has received many international awards including a Grammy for Best Rap album.

Pulitzer winners do not make acceptance speeches, but in a Facebook Live video on the Pulitzer Prizes page, Lamar told Sree Sreenivasan, “I’ve been writing my whole life, so to get this type of recognition ― it’s beautiful.”

The Pulitzer Prizes date to 1917 and honor outstanding work in journalism and the arts, letters and music. The first Pulitzer for music was awarded in 1943 to William Schuman for “Secular Cantata No. 2: A Free Song.”