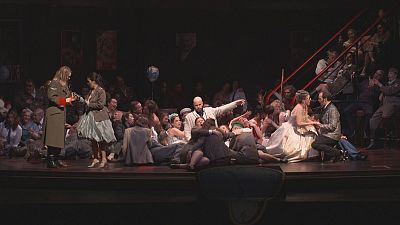 A lighthearted tale, a rollercoaster of mistaken identities and wicked revenge, 'Die Fledermaus' by Johann Strauss is enchanting audiences at the Deutsche Oper in Berlin.

The sumptuous production is staged by legendary tenor Rolando Villazón.

“The music in this piece is just fantastic!" he told our 'Musica' reporter Katharina Rabillon.

"The energy in the music, the rhythm of the music, it’s really contagious. It makes your heart start dancing!"

Villazón's enthusiasm is shared by the cast.

Tenor Thomas Blondelle said: "The tempo that is necessary in an operetta, both musically and in the staging... the fact that the characters need to be taken seriously... that makes the operetta, for me, the queen of opera!"

In the production, Blondelle and energetic soprano Annette Dasch inhabit the giddy high society world of Gabriel von Eisenstein and Rosalinde, who is determined to teach her philandering husband a lesson.

"The themes it speaks about remain modern," explained Villazón.

"The archetypes that are portrayed on stage still speak to us and will speak in the future to people. So, in that sense, 'Fledermaus forever!' And therefore the staging goes in a time travel."

The journey starts in the 19th century, then moves in time to a party at a bunker in communist East Berlin and onto the uncertain future in space. The characters, too, are on a journey.

"Every role, it's a fight. It's a revolt, the revolting of what they think they are supposed to do, what they want to do," Villazón said.

Annette Dasch, too, stressed the depth of the characters in Villazón's production.

"Right from the start, this Rosalinde that Rolando created for this staging, is a person with different faces," Dasch told 'Musica', illustrating the point by demonstrating alternating hysterical and demure expressions.

"This is really Rolando. This is what he wanted from me."

Villazón's human touch towards those bringing his vision to life is also much appreciated.

"He is really somebody who completely sees the person in front of him and senses their physicality, how they could be funny and he encourages you. He creates a safe space," Dasch said.

"I think that we have created this together and he has just an incredible fantasy!"

For Villazón himself, the first night was an emotional experience.

“It is a special feeling for a stage director, the premiere, because you are enjoying watching it, you feel happy and there is a little bit of nostalgia because you are now leaving and you have to say goodbye,” he said.

The next performances of 'Die Fledermaus' are on May 29, June 3 and June 8.