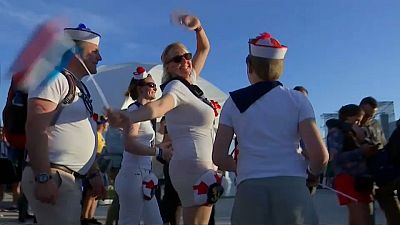 As Portugal prepares to host the final of the 2018 Eurovision Song Contest Cyprus remains the bookies' favourite.

Greek popstar Eleni Foureira, who is representing Cyprus, was in fact born in Albania.

Her song Fuego - spanish for "fire" - has already made it as a top five hit in Greece.

More than 200 million people are estimated to watch the annual Eurovision Song Contest, which activists say shines a light on the lesbian, gay, bisexual and transgender  community, including in countries where they are stigmatised.

That includes Russia, booed at Eurovision for its 2013 law against so-called gay propaganda, and China, where a broadcaster has been barred from airing the show after censoring some songs.

Starting in 1956 with just seven countries, Eurovision is now in its 63rd year and has been recognised by Guiness World Records as the longest-running annual TV music competition.

Ireland has taken the top prize most often.