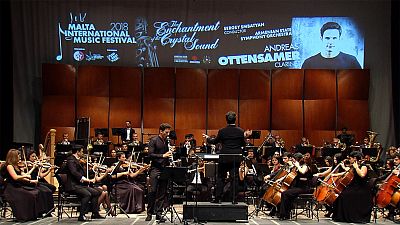 Top musicians delighted audiences from 15 April - 1 May, with the Armenian State Symphony Orchestra in residence.

Our reporter Wolfgang Spindler said: "The Malta International Music Festival comes to an end with Austrian clarinetist Andreas Ottensamer performing with the Armenian State Symphony Orchestra under the baton of Sergey Smbatyan. Amongst the highlights was 'Verdiana', variations on Giuseppe Verdi's opera melodies, composed by Alexey Shor."

Ottensamer, 29, is also the principal clarinetist of the Berlin Philharmonic Orchestra. Smbatyan, one of the most promising conducting talents around, is just 30-years-old.

Kiev-born Shor was composer in residence throughout the festival.

"I got the request to write something related to Verdi for a tour of Latin America." he explained to Euronews.

"I thought it would be entertaining to take famous melodies by Verdi and present them in South American styles. It's in three movements. The first one is a samba, the second is a bossa nova and the third, the most virtuosic one, is a tango."

Shor is a self-taught musician. He studied mathematics before dedicating his life to music.

Ottensamer and Smbatyan have performed together several times in the past. Each time they meet on stage it seems to be the perfect match.

They told us about their artistic chemistry.

"It makes it easier if there is a personal kind of understanding and so we were having a few twinkly eyes between the movements," Ottensamer laughed.

"It is the ensemble. It is the magic," Smbatyan confirmed.

"Ensemble on the stage to understand how it works, especially with the orchestra. There was not so much time to rehearse but it is a magic and, of course, eye contact, atmosphere, energy, peace and, at the end, artists."

The Malta International Music Festival is an important classical music event, with high-class stars from around the world, workshops and a piano competition.

It is also a valuable asset for Valletta, European capital of culture this year!