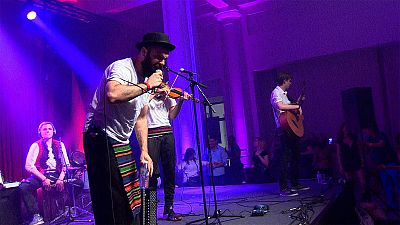 The Balkan Trafik festival has a new challenge: to bring together live artists from Serbia, Kosovo and Bosnia-Herzegovina together over four days. The rehearsals served to build bridges where politicians have not always manage to succeed.

"Before the war I used to have friends Serbs, Bosnians, Croatians," says Bimbimma, a hip hop artist from Kosovo.

Marcelo, a hip hop and fusion performer from Serbia, says: "We either are gonna work together or we are gonna kill each other; and we think that it is a little bit better to work together and live together."

This was not the its only gamble. The festival, traditionally oriented towards folk music, has opened its doors this year to urban music: hip hop and slam.

This year, the experience included a Belgian artist, who discovered that the Balkans are not that far.

"I have learnt to discover because before I did not know Balkan music at all, says Youssef Swatts from Belgium. "But with teamwork it comes naturally."

The festival thus builds bridges not only between the countries of the Balkans, but also towards the other countries of Europe. And in their music, often charged with social criticism, hip-hopers have found more than one point in common.

"We fight the corruption, corrupted minds and corrupted souls, says Bimbimma. "And we also fight the main war: this is materialismus against spiritualismus."

For the organiser of the festival, the time had come to broaden perspectives, to renew.

Says Nicolas Wieërs, the cultural producer of Balkan Trafik: "There is a youth, a new generation in Balkans; the Balkans is not just traditions, is not just folk or ethnic; it is also very contemporary, and this "urban chapter" is here to help meet once more Europe and the Balkans through music and art."

This year Balkan Trafik celebrated its 12th edition and more than ever there was something for everyone. The public seemed to enjoy swapping one genre for another.

"It is very lively, everybody is so happy; the music is so versatile, there is so many kinds of Balkan music, it is wonderfull," says Thomas from Belgium.

In total there were more than 400 artists, from every country in south-eastarn Europe, including Bulgaria, Turkey, and Romania.

Balkan Trafik is an event that mixes tradition and modernity for an eclectic and enthusiastic audience.