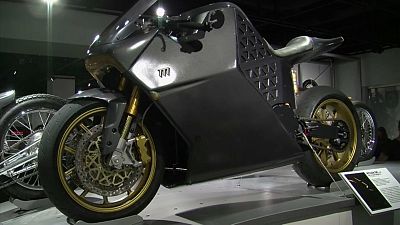 The so-called "Custom Revolution" hit the U.S. West Coast this week with the what the Petersen Automotive Museum is calling the world's first exhbition dedicated to the art of customising motrocyles.

The exhibition, which opened on April 14th, includes 24 different bikes, spanning 23 of the most influential and innovative alternative bike builders of the past 10 years.

Some notable bikes include; Black Shadow Cafe Racer by Falcon Motorcycles of Los Angeles. The rarely seen bike was built in 2014 and based on the 1952 Vincent Black Shadow.

This BMW White Phantom Dragster from 1986 started life as a BMW R80RT and was redesigned in 2015. It stands out for its striking body work including curved edges, gold piping and a suede seat.

Also on show is this E-Lisabad Dragster - an electric bike built in 2017 by Krautmotors of Heidelberg, Germany from a BMW scooter chassis. It is known for its silence yet extreme speed.

This BMW Alpha was once a 1991 Salt Flatsracer originally designed by Turkish designer Mehmet Doruk Erdum and rebuilt in 2016 by Mark Atkinson of North Salt Lake Utah.

"This is an exhibit where we brought together motorcycles from all over the planet. We're not looking at an American phenomenon, we're looking at a Los Angeles rooted phenomenon, that is now actually a global phenomenon." said Bryan Stevens the Creative and Exhibitions Director for Petersen Automotive Museum.

Stevens says the goal of the museum is to foster creativity and inspire others.

The South Korean artist bringing paper art to the world