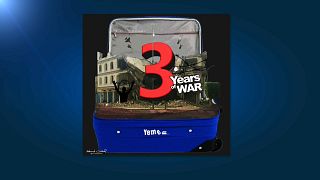 Saudi Arabia and an alliance of Muslim states intervened in Yemen's civil war in 2015 and since then airstrikes have killed hundreds of people.

Artist Ahmed Jahaf lives in Sanaa and uses to his work to raise international awareness of what is happening in his country.

He says life in Sanaa is difficult to explain as many Yemeni citizens live without electricity and water. There are no airports or sea ports and food is either not available or very expensive

Jahaf says art for him is a form of resistance.

"I could not stand with my hands tied in front of what is happening in my land," he explains.  "The picture is sometimes painful and sometimes people refuse to watch it, so I chose caricature, art and graphics to convey simple and comprehensive messages."

Jahaf admits he has sometimes found it difficult to find the right way to express his ideas.

"In the beginning, I used to have this problem with using symbols to imitate certain countries and I never intended to insult any symbol of any country," he says. "For example, I used 'the sword' to express Saudi Arabia."

He says he is grateful for the support he has received from European activists and different media.