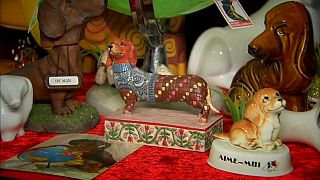 Two proud sausage dog owners and former florists gave up their jobs to open the museum.

"We have been collecting many different pieces ourselves for 25 years, and last year in autumn we bought the entire collection of a Belgian collector. We have around 2,000 pieces on show at the moment in the museum and at home we also have the same amount. Currently we have the world's largest collection, with 4,000 pieces, all about the dachsHund."

It's one of Germany's oldest breeds, bred for hunting since the Middle Ages - Now this new museum pays tribute to a dog which is appreciated for its faithfulness - In German, there is a saying 'Being faithful like a Sausage Dog'