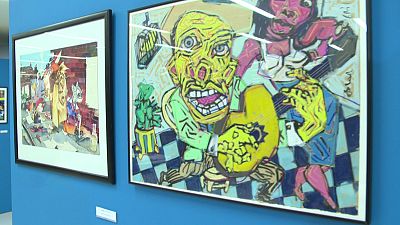 Argentinian artist Oscar Grillo is this year’s guest of honour at the annual Cartoon Xira. The event, which takes place in a town not far from the country’s capital Lisbon showcases drawings by hundreds of Portuguese artists. Their tastes and targets vary. Donald Trump is a common subject up for pillory, so too is the North Korean leader Kim Jong-un.

Some artists have stayed closer to home, paying homage to Mario Soares, a key figure in Portugal’s transition away from its dictator Salazar. Also pictured are the new Portuguese President of the Eurogroup Mario Centeno and Marcelo Rebelo. The Portuguese President is known for his love of a selfie.

Other’s deal with last year’s wildfire which killed hundreds of people. Former Interior Minister Constanca Urbano de Sousa posed next to sketches of her. She was forced out of office last year after intense criticism over her handling of the fires.

There are also 100 works of art by Argentinian artist Oscar Grillo. Grillo said some of the works on display were ‘mistakes’, and that he’d only kept them so he could use the other side of the paper to draw on.