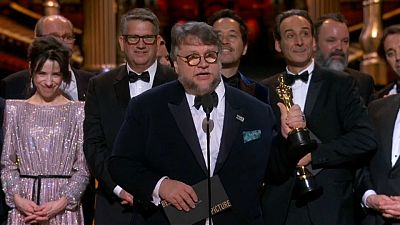 Guillermo del Toro was the big winner at this year's Oscars with his fantasy tale, 'The Shape of Water' collecting four awards including best film.

In his acceptance speech the director stressed that persistance pays off.

"I want to tell you, everyone that is dreaming of a parable of using genre of fantasy to tell stories about the things that are real in the world today, you can do it. This is a door, kick it open and come in. Thank you very much." said del Toro.

Frances McDormand won best actress for her role in "Three Billboards Outside Ebbing, Missouri"; and urged all female nominees in the theatre to stand up as she called for more inclusion.

Gary Oldman, one of three British nominees, paid tribute to his character in Darkest Hour when he picked up best actor:

"I would just like to salute Sir Winston Churchill who has been marvelous company on what can be described as an incredible journey. And my wife Gisele, for traveling that road with me and being at my side."

Oldman plays Churchill during the early days of World War II when the newly-appointed British prime minister must decide whether to negotiate with Adolf Hitler, or fight on against incredible odds.

The Best Foreign Language film went to 'A Fantastic Woman' by Chile's Sebastián Lelio. The movie revolves around Marina, a transgender woman who works as a waitress and moonlights as a nightclub singer.

Belarus denies reports of 8 explosions at airbase near Ukraine border