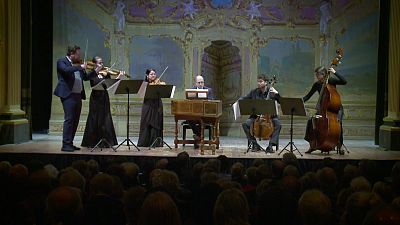 Baroque music on the rocky island of Malta.

The city of Valletta was founded in the mid-16th century and baroque is everywhere in the Maltese capital. It’s a perfect setting for a baroque music festival.

Since the first festival six years ago, the annual event has become one of Malta’s cultural highlights and attracts more and more visitors every year.

“So far it’s been very encouraging, says Artistic Director Kenneth Zammit Tabona. “We’ve had full houses practically every day. Every year the groups get larger. They come from all over Europe. Some people come from Japan, some people come from America and, of course, the Maltese concert-goers come in droves”.

Among the surprises in this year’s programme, Belgian accordionist Phillippe Thuriot playing Johann Sebastian Bach’s Goldberg Variations. Originally written for harpsichord, it consists of an aria and a set of 30 variations. The composition is considered to be one of the most important examples of variation form.

Mdina is Malta’s former capital, founded in the 8th century BC by Phoenician settlers.

“Its beauty is always appreciated in all eras. This is a language that speaks to our time through its music but also through its subjects. It speaks about life, about death, about hope, and those are themes that are as alive today as ever”.

Rameau was one of the most important composers and musical theorists of his time and dominated French opera in the 18th century.

Flautist Alexis Kossenko is the conductor of Les Ambassadeurs:

“His music was completely ahead of its time, you can’t even say it’s baroque music. This music anticipates all the aesthetic trends which came up centuries later. It’s realist music, which is expressionist, impressionist, so the music of Rameau is a music that speaks about life; he’s a painter of music”.

Soprano Claire Debono has performed all over the world. These days, she is based in Paris and sings all genres of classical music.

This year, Malta’s baroque festival had 26 events in 14 locations in Valletta and at various other locations across the country.

Up Helly Aa Viking festival kicks off in Shetland