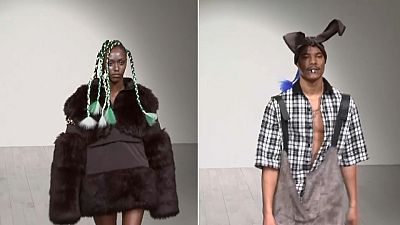 Bugs Bunny, Tweety Pie and Road Runner all made an appearance in the high energy streetwear collection from the designer, who launched his label in 2012.

From colour to black-and-white as Korean fashion designer Kang Dong Jun showcased a monochrome selection of streetwear infused with traditional Korean silhouettes and Western tailoring for his D.GNAK label.

Kang’s vision for his label is popular avant-garde that stands at the intersection of the underground and the mainstream without compromise in quality or cut.