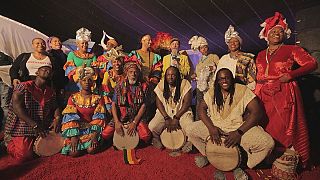 The 2017 Visa For Music (VFM) has taken place in the Moroccan city of Rabat, Morocco. VFM is an international music fair promoting music from Africa and the Middle East. It is also a forum to exchange know-how about improving management in the music industry and festival business.

Amongst those taking part was ‘The Messengers of Messages’ a pan-African group whose messages — in the spirit of former South African president Nelson Mandela — are those of peace, unity, forgiveness and the reconciliation of the African continent.

Prince H. Malatsi, the group’s leader, is from South Africa, and explained to Euronews why the band came to Visa For Music.

“Well, the business actually is really to make sure that we collaborate and we have a vehicle to travel around the world to spread our message,” Malatsi said.

Kora virtuoso Sékou Kouyaté is from Guinea but lives in France, he is better known in Europe than in Africa.

“It went really well, I think we had a lot of people and they liked it and we got invited for many festivals and tours,” Vallejo told Euronews.

Francky Kanza, from Republic of the Congo, had just released his second album. He shared his fair booth with Moroccan-based singer Seham Diminick from Ivory Coast, who has just launched her new album.

“We are looking for producers, promoters, and true managers who can put us on the big stage and at big venues,” Kanza told Euronews.

They thrilled the audience with their energetic concert during the ‘Music For Visa’ fair.

“Oh well this is an opportunity for us to play in Africa, its our first time we are playing here and we know there is a lot of people here with are really influential, so may be we can get some gigs somewhere in Africa after playing here and we will see if there is something coming up in the future,” band musician Miki Santamaria said.

‘Agadirlive’ promotes and manages musicians from Agadir. Mehdi Ouhaddi represented two artists who perform in the Berber language: a young rapper and singing poet. He shared his booth with Londoner Gareth Messam who represents a steel drummer.

“We did a lot of business, we have got few blocking agents on board, lots of collaborations to do people gonna do – before we leave, we leave next week we good do some recordings and we some lives as well,” Messam told Euronews.

They already have several European tours behind them. Now they’re promoting their latest album, released earlier this year.

Lmoutchou is huge in Morocco: he raps in the Moroccan Arab dialect Darija. Euronews asked him if he thinks his music could be exported outside Morocco.

“We don’t understand certain languages but we manage to feel when the artist is strong – in my case its the same when I perform for foreigners, those people know I have something to say, they feel I have to present something which is structured and well composed.”

About 2,000 professionals from the international music business attended “Visa For Music”

“Most countries in Africa and the Middle East are in the news when it’s about war, violence and misery. But those countries also want to share their cultural values. Visa For Music is certainly a perfect platform for those international artists to find contacts, to travel around the world, showcase their art and another side of their countries,” reported Euronews’s Wolfgang Spindler.