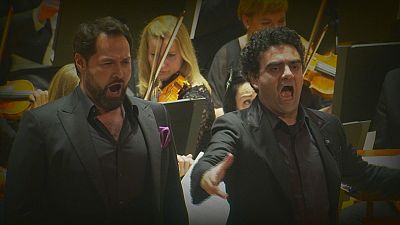 Duets for tenor and bass are few and far between: opera stars Rolando Villazón and Ildar Abdrazakov are bringing these rare gems to the stage in a series of concerts across Europe.

We are our voices.

The #anticipation of the #aria evening with RolandoVillazon</a> & <a href="https://twitter.com/IldarAbdrazakov?ref_src=twsrc%5Etfw">IldarAbdrazakov is evidently rising not only in us: the two singers expressed their euphoria on the Sunday’s #concert spontaneously in a dance of joy… tickets for 26 Nov: https://t.co/0LrbpIT9tQpic.twitter.com/fo03y8s3LE

Their tour debut in Prague’s Smetana Hall showcased some of the finest operatic arias and duets – including some from Arrigo Boito’s opera ‘Mefistofele’ – accompanied by the Janáček Philharmonic Orchestra.

Euronews met with them in Prague.

Rolando Villazón: “It is not an immediate repertoire to put together – duets for bass and tenor. They are the extreme voices but there is this point of connection in the harmony and in the colours. I mean, personally it feels very comfortable to sing these duets and, yes, there are not many duets.”

Ildar Abdrazakov: “Yes, and we try to use all of our ‘tessitura’, all our vocal moments – great moments – where the voice can be full of the beautiful sounds around.”

The Russian bass and the French-Mexican tenor first met in 2009 when they performed together at the Met Opera in New York in Donizetti’s ‘Lucia di Lammermoor’. They hit it off immediately.

Rolando Villazón: “He is a very imaginative person and artist and so the voice comes through like that as well. It is able to go through the metamorphosis of the different types of characters that he has to play.

Ildar Abdrazakov: “Yes, it’s true because it is not only two vocal chords. It’s our mentality also, and Rolando is a special singer with his wonderful and beautiful, coloured voice and when he is acting, it’s fantastic.”

The programme also includes two musical favourites – tributes to their home countries: the Russian folk song ‘Oči černé’ (‘Dark Eyes’) and Mexico’s legendary ‘Granada’. The official word is: they chose it together…

Ildar Abdrazakov: “Sorry, I chose ‘Granada’!” (Laughs) “Yes, because I have sung ‘Granada’ many times.”

Rolando Villazón: “You know, the nice thing is we had to sing something from each other’s culture: something in Spanish, something in Russian.”

Ildar Abdrazakov: “I grew up with this song, with Oči černé. Oči černé is about love, about a beautiful woman, with beautiful eyes.”

Rolando Villazón: “It’s very inspiring. I mean, everything that there needs to be inside of an artistic accomplishment is there, and, of course, it is surrounded with a wonderful energy, with good humour, with fantasy, with imagination, with spontaneity, and it’s fantastic.”

It will be fantastic! Join Rolando and Ildar Abdrazakov in Munich on December 3! Learn more: https://t.co/fMgaDj23Yr#RolanditchkaAndIldarcitopic.twitter.com/oW4YA06dTk

Their album, ‘Duets’ is out now.