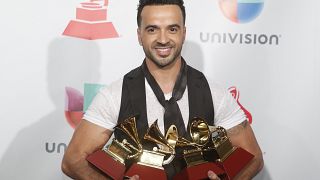 The latin Grammy awards have been awarded at a star-studded ceremony for the 18th edition in Las Vegas, and the whole night took on something of a political air with various artists choosing to make statements
on receiving their prizes.

“This award is for Puerto Rico. Viva Puerto Rico,” said the happy winner.

Fonsi has been outspoken about the plight his island Puerto Rico has been plunged into since hit by hurricanes this year.

Person of the year was Alejandro Sanz, who accepted his award on behalf of all those taken into the USA illegally as children, the so-called “dreamers” President Donald Trump says he would like to send home.

“And I would like to dedicate it to other children who have lived in this country for many years and still in an illegal situation, they are the “dreamers,” said Sanz.

Of course the night was packed with music showcasing the depth and variety of talent from Latin America, whether home-based, or recording and working abroad.