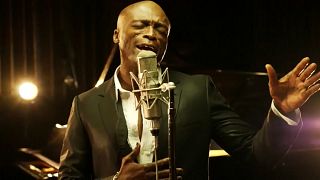 Grammy Award winning soul and R&B singer Seal pays tribute to legends Frank Sinatra, Ella Fitzgerald and Nat King Cole, among other music icons in his new album ‘Standards’ which is set to be released on November 10.

The British artist, best known for his 1990’s ballads like “Kiss from a Rose,” says working on an album of jazz and pop changed his own approach to making music:

“Everything is focused on the storytelling. And if that is not intact, everything else falls to pieces. It doesn’t matter how great the arrangements or the orchestrations are.”

“So you sing a song like ‘It Was a Very Good Year,’ for example. It has to be dialogue.”

“ It is about this kind of storytelling, we are having dialogue. And that kind of seems to be the theme with me at the moment – both kind of personally and professionally.”

Recorded at the legendary Capitol Records studio in Los Angeles, the album is comprised of songs made popular by Frank Sinatra (such as ‘Luck Be A Lady,’ ‘I’ve Got You Under My Skin’ and ‘It Was A Very Good Year’), as well as Ella Fitzgerald (‘I’m Beginning to See The Light’) and Nina Simone (‘I Put A Spell on You’).

During production, the 54-year-old said he was wary of trying to change the classic tunes.

“One has got to be really careful with that because the songs have withstood the test of time”.

“I feel that the songs from that era, they sing you. You’ve just got to trust them and trust the melody because the melodies are immaculate. They are sublime,” he added.