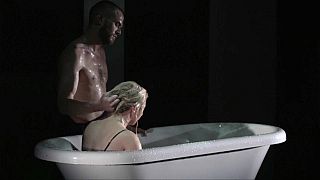 Splashing water onto the stage of a New York theatre, a man is dunking a woman in a bathtub as she is trying to recite a poem, choking and gasping for air. Fight or die: this is what a struggle against the Russian state comes down to for Maria Alekhina of the Russian punk collective Pussy Riot, who along with another band member was shipped off to prison for a protest against President Vladimir Putin five years ago.

For Alekhina and Nadezhda Tolokonnikova, the nearly two years behind bars still serve as a source of creative inspiration and motivation to campaign for prisoner rights in Russia. Alekhina, 29, is now touring with the play “Burning Doors” that recreates her traumatic prison experience, while Tolokonnikova, 27, stars in a video merging the brutality of the Russian repressive machine with Donald Trump’s America.

Pussy Riot’s Masha Alyokhina aims to fire up D.C.’s freedom fighters with a book and a play https://t.co/kGLmCpHThZ

Both are hoping their performances will give a voice to the millions of forgotten and abused Russian prisoners.

Their artistic creations were forged from a challenging past. Two weeks before Putin was re-elected in 2012, Alekhina, Tolokonnikova and Yekaterina Samutsevich, clad in balaclavas for a “punk prayer”, entered the Christ the Saviour Cathedral in Moscow and started to sing “Mother of God, drive Putin away”. Their performance was only 40 seconds long, but the backlash was immediate: they were quickly arrested and jailed.

In October 2012, a Moscow court found them guilty of “hooliganism motivated by religious hatred.” Putin insisted he had no part in the court ruling but welcomed it, blaming the Pussy Riot women for “undermining the basic norms of morality.” Samutsevich had her prison term converted into a suspended sentence on appeal.

Once in prison, Alekhina and Tolokonnikova started writing petitions about the appalling conditions they encountered, going on hunger strikes to protest overcrowded cells and lack of basics such as medicine or hot water. Both spoke of monotonous work sewing uniforms that could stretch up to 16 hours a day. At a theatre in New York’s East Village, Alekhina bit her black nails and chain-smoked as she recalled their ordeal.

The play, which tells the stories of three Russian artists imprisoned on political grounds, is produced by the Belarus Free Theatre, whose own members faced repression at home. It’s playing in New York, following shows in Australia and Europe. Telling her story is Alekhina’s way of speaking out for countless prisoners in Russia who face violence and abuse every day.

“For me it’s first of all an opportunity to share with people the experience I have. Not just to talk about it but to share. Secondly, it’s a personal overcoming in many respects,” she said. Alekhina has also written an autobiography, “Riot Day,” which was published in September in Britain in English.

Russian prisons are tough places, but a Pussy Riot member won some reforms for herself and her fellow prisoners https://t.co/9NhKn8GOS9

After they were jailed, the two Russian women became global celebrities. Their multi-coloured balaclavas became an instantly recognizable brand and entertainment icons including Paul McCartney and Madonna urged their release. Tolokonnikova, dressed in a Russian Penitentiary Service uniform during this interview, describes that support as “a miracle.”

“We saw that our performance, it wasn’t for nothing. We managed to get the message across somehow,” she said.

Tolokonnikova has fond memories of an anonymous band that played outside the courthouse during their trial, often drowning out the judge. But there were also ultra-nationalist Orthodox Christian activists who rallied, demanding the women’s incarceration. In a twist of fate, Alekhina is now dating one of them, Dmitry Tsorionov, who has since been kicked out of the Orthodox group. The couple recently went to the Russian Justice Ministry in Moscow to read Bible excerpts to protest a law restricting missionary work.

Alekhina and Tolokonnikova were pardoned in December 2013 as the Kremlin tried to improve its image before hosting the 2014 Winter Olympics in Sochi. They performed at Britain’s Glastonbury music festival, shared the stage with Madonna at an Amnesty International concert and appeared in an episode of the Netflix TV series “House of Cards.” Their performances in 2014 and 2015 helped raise funds for two projects they have founded; a non-governmental agency named Zona Prava that provides legal help to Russian prisoners and Mediazona, a website that covers Russian courts and prisons.

The two, however, do not collaborate any longer beyond the advocacy and the news website.

Dismissing suggestions of a split, Alekhina insists that Pussy Riot, with most of its members being anonymous, was never about personalities: “It’s a collective of people who do political art in various forms.” Tolokonnikova has shifted away from performing to focus on video art. She spends a lot of time abroad these days, her big pink suitcase livening up a monochrome studio in Moscow. The day after the interview she was leaving for a literary festival in Mexico. In one of her recent videos, “Organs,” she bathes in a bathtub full of blood while reciting lyrics about prison and repression.

In a stark contrast to Pussy Riot’s previous homemade videos, Tolokonnikova has gotten help from top talent – including Jonas Akerlund, who has directed videos for Beyonce and Metallica. Tolokonnikova has also raised funds for an immersive theatre production in London that recreates life in a brutal Russian prison, hopefully breaking “the wall that separates prison from free society.” Both women are haunted by their gruelling prison experiences.

“When you see a person literally dying in front of you … it’s one of the things that is pushing me to act. It should not be like this,” Alekhina said. They take pride in even incremental victories against the Russian state, like when a prisoner with terminal cancer is released from jail or another’s family wins a court case against prison authorities.

“When we walked out of the prison, we thought we were these punks crippled by fate. But it turned out that we had the energy to build two organizations,” Tolokonnikova said. “You take one step, then another. But you cannot transform the entire prison system without profound political changes in society.”