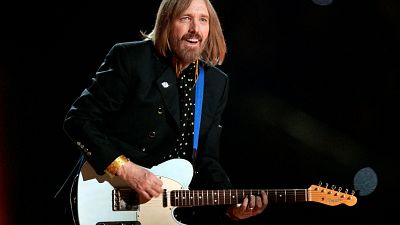 “We are devastated to announce the untimely death of our father, husband, brother, leader and friend Tom Petty,” his long-time manager Tony Dimitriades said in a statement on behalf of the family.

The musician, singer and songwriter was found unconscious and in full cardiac arrest at his Malibu home early on Monday (Oct. 2). He was taken to hospital, but could not be revived and died later surrounded by family and friends.

Petty was the lead singer of Tom Petty and the Heartbreakers, which first soared to the top of the charts in the 1970s. He had just finished a 40th anniversary tour with the band last week.

In the 2007 documentary “Runnin’ Down a Dream,” Petty talked about how music took hold of his life — and led him to become one of the best-selling artists ever.

In the mid-1980s Petty played with Bob Dylan at the Farm Aid festival. That led to a worldwide tour.

“It was just one of those gifts from God, when we were both thrown in there together it was like some sort of electricity came from the combination,” Petty told the Today Show in 1989.

Petty also co-founded the 1980s supergroup The Traveling Wilburys with Bob Dylan, Roy Orbison, George Harrison and Jeff Lynne, penning hits such as “End of the Line” and “She’s My Baby.”

Dylan called Petty’s death “shocking, crushing news” in a statement to Rolling Stone magazine. “He was a great performer, full of the light, a friend, and I’ll never forget him.”

Fans have been paying tribute to the rock star at the Hollywood Walk of Fame, where the Heartbreakers were honored with a star in 1999.

Another great man gone too soon. #TomPetty you were an exceptional talent. Your legacy lives on. pic.twitter.com/GsmySCTNfU

From the Heartbreaker’s debut 1977 album, single “Breakdown” announced the arrival of a major talent, even if it needed a second release to make a stir, carried aloft by the smash hit that was…

American Girl catapulted Petty in a stroke into the rock stratosphere, an instant classic destined to be covered eternally, so clearly rooted in rock and roll it allowed Petty to surf the Punk wave on both sides of the Atlantic with ease while pleasing mass US audiences.

While he was best known for his outstanding back catalogue and enduring relationship with his band, Petty was also an outspoken commentator on the music business and how it treated artists.

Another example of why so many people looked up to #TomPetty, not only as an artist, but who he was!

So much for the “difficult” third album. 1979’s ‘Damn the Torpedoes’ included this monster and ‘Don’t do it like that’. But it did usher in the period of difficult relations with the record company MCA, then trying a dollar surcharge on its superstar albums, like Steely Dan’s ‘Gaucho’. Petty resisted for album number four ‘Hard Promises’.

You know you must be pretty good when Mr. Cash comes calling. The legend covered 1985’s ‘Southern Accents’ in 1996

The 1989 album Full Moon Fever was the biggest-selling record of his solo career, but in more than 40 years of making music Petty sold 80 million records worldwide, either solo, with the Heartbreakers or as a member of supergroup The Traveling Wilburys.

Once upon a time we all loved MTV. Especially when Tom was on

Hell no, he won’t back down! So ️#TomPetty ️ Saying prayers for him and his family! Stand your ground.

My thoughts and prayers go out for the victims & their families of #LasVegas today as well as for tompetty</a>'s friends & family. <a href="https://twitter.com/hashtag/TomPetty?src=hash&ref_src=twsrc%5Etfw">#TomPetty</a> <a href="https://t.co/wMssUUGCs2">pic.twitter.com/wMssUUGCs2</a></p>— Sammy Hagar (sammyhagar) October 2, 2017

“I don’t know, my music has always just come from where the wind blew me. Like where I’m at during a particular moment in time.” #TomPettypic.twitter.com/MrKO3YLRlI

Thank you for all of your gifts!You are a legend and you will live on in my heart forever. RIP#legend#tompetty#riptompic.twitter.com/94MYVUbeo6