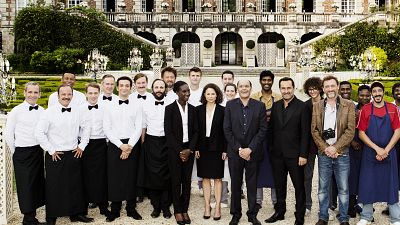 The 65th San Sebastian Film festival adopted a humorous attitude this weekend featuring several comedies. French directors Olivier Nakache and Eric Toledano who are familiar faces at this celebrated film fest have lead the way with C’est la vie or this is life.

The film goes behind the scenes of a super-classy wedding where a Parisian hospitality company is providing the food, booze and service. The guy in charge has to deal with what can only be described as a staff full of idiots and chaos ensues.

“We are seeing at the moment lots of terrible things going on all over Europe… attacks and killings and we have all cried a lot and there seems no end to it. So we said to ourselves we need a break. We want to hear people laughing together. That’s why we’ve made this film who are different but who in the end pull together.

Other films on show have included Spain’s stylish “El Autor” or “The Motive”. Reporting for Euronews, Carlos Marlasca appreciated the comedic touch:

“Comedy has been the prevailing note this weekend in San Sebastian. While the French gave us honest, open humour, Spain entertained with a dark comedy and then there was the not to be missed “Handia” the flagship of new Basque cinema.