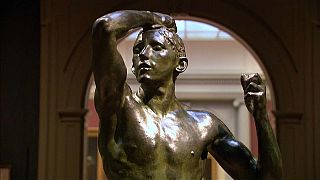 New York’s Metropolitan Museum of Art is honoring the centennial of the French master sculptor Auguste Rodin’s death with a special exhibit.

Nearly 50 pieces of the museum’s extensive collection are on display, including iconic works such as “the Thinker” and “the Hand of God” in a newly refurbished gallery designed to engage visitors with his works.

#RodinatTheMet begins a new chapter in the Museum’s long-standing engagement with Rodin. pic.twitter.com/aqhktIYuSd

“The idea for this exhibition was to show Rodin sculptures in this long gallery which is one of the main arteries in the museum, in a way that allows people to truly embrace the sculptures and be with his achievements,” curator of the exhibit, Denise Allen told Reuters.

For the occasion, the Met showcases works that have not been seen in public for decades such as “the Tempest” and “Rodin’s Hand”. Another new feature about the exhibit is that works have been moved around to give viewers a more complete view of Rodin’s vision. “The Hand of God” is one of such pieces, and is now on a center pedestal allowing visitors to walk around it, while it was previously shown against a wall.

‘Rodin at The Met’ at The Metropolitan Museum of Art, New Yorkhttps://t.co/Nvr7PXIe54pic.twitter.com/c21jHqrU3n

Curator of the exhibit, Denise Allen : “This is a person awakening but we don’t know, is he awakening to joy or is he awakening to pain. And this beautiful ambiguity, this ability to see the humanity within each and every figure is I think his great contribution,”.