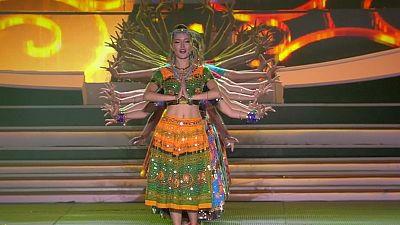 The best, voices, sounds and rhythms from the Asian region descended on Almaty for the two-day “Star of Asia” international festival.

The event was held just outside the Kazakh city and featured top stars of all music genres. Among the Kazakh stars was Kamshat Zholdybayeva.

The singer and actress based in Almaty is a huge fan of Hindi film songs and she presented a colourful Bollywood-style show.

“For an artist it is really important to participate in such an international event because it gives us the opportunity to get acquainted and exchange experience with colleagues from other countries, Zholdybayeva said.

Kairat Nurtas is according to “Forbes” the No1 rated celebrity in Kazakhstan. The 29 year old regularly attracts up to 40,000 fans for his concerts.

Sanah Moidutty is a young emerging star from Mumbai, India. She started singing from the age of five and had her first stage show aged seven.

Moidutty is multilingual and is said to be able to sing in English, Hindi, Marathi, Tamil, Malyalam, Telugu, Bengali, Punjabi, Gujarati and Kannada.

“I also did northern Indian classical music which is “Hindustani” music so its a mixture of both music which comes from India and apart from that I have done training in western music but my roots lie in Indian music.

The 29 year old is known for her pop songs and singing in Hindi romance Films.

“I have liked rock music since my early childhood and used to dance a lot to it. In China Rock is very popular amongst young girls.

At the “Star of Asia” festival in Almaty the young rock singer seduced the audience with her charm and her distinctive vocal style a la Blondie.

U-Kiss went down a storm at the festival.

The South Korean boys band have had huge international success since their formation in 2008. On Youtube alone they have 17 million followers and of course here in Almaty the K-Pop stars were among the highlights of the “Star of Asia” show.

“Our group is called U-Kiss and we are K-Pop Boy group,” says Eli Kim.

“We are singing a lot of dance songs today and we are we are trying to make it feel very energetic we just want have a fun, powerful stage.”

The Star of Asia festival has been a voyage of discovery, says Euronews’ correspondent Wolfgang Spindler, with over 50 international and national Stars, presented in a mega stage show in Las Vegas style.

“With this new festival, the city of Almaty wants to attract tourist, lets hope it works out – I wish them good luck.”