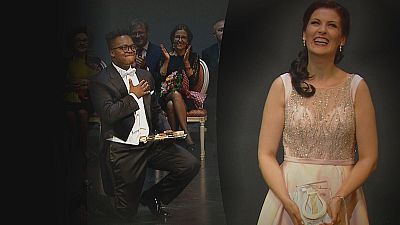 During the past 25 years, Plácido Domingo’s Operalia has become the world unmissable opera competition for young talent which each summer shows off tomorrow’s stars.

This year it took place in Astana, the capital of Kazakhstan, in an opera house that is only four years old – a suitably new venue for the competitors who must be between 18 and 32 years old.

“Today it’s very difficult to find a theatre where there are not any singing Operalia winners or finalists,” Plácido Domingo, Operalia’s founder said.

The true revelation of the competition was the Romanian soprano Adela Zaharia, who won not only first prize, but the Zarzuela prize.

It’s named after the Spanish operatta that Domingo grew to love as a child when his parents worked in a Zarzuela company in Mexico. The genre is composed of spoken and sung scenes and incorporates both popular and operatic songs.

“I didn’t do any competition till now, and I wanted to check, you know, exactly the standpoint where I am, compared to other fellow singers and to the requirements of the big houses and very important stages,” Zaharia said.

In the male voice category, the jury was blown away by South African tenor Levy Sekgapane, who became the first South-African male voice to win first prize at Operalia.

“I felt like there’s something I’m missing in my opera development and I thought, you know, I think I still need to do Operalia. I want to meet Maestro Domingo, I want to work with him. He’s the godfather of the opera, of the opera world,” Sekgapane said.

One of the jury members explained that success at Operalia is about much more than just technical expertise.

“Very often, ‘amazing performers’ are not the best technically, on a formal level, but they have this extra something that puts the audience in ecstasy. And in this competition, there are singers of this magnitude,“Giuseppe Acquaviva, said.

All the winners gain great kudos in the world of opera. “The judges, they are directors of theatre. So they are going to engage them, for sure you know,” Domingo said.