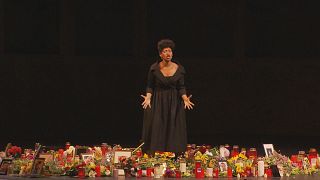 In a world of fears and social tensions, a new look has been given to Mozart’s opera of reconciliation, ‘La Clemenza di Tito’.

One highpoint of this year’s Salzburg Festival, the contemporary take on Mozart’s masterpiece is the work of a distinguished duo – conductor Teodor Currentzis and director Peter Sellars.

Their question for today’s audience is: ‘How do we live together in an age of conflict?’

“I think Mozart really had had enough of the ‘Great Man theory’. And Mozart is about the community, not about the single individual,” said Sellars.

“The single individual is part of, and becomes, more interesting in a democracy. “

Trinidadian soprano Jeanine De Bique is among the singers performing in the production.

Making changes in the history of Opera! @SbgFestival#laclemenzaditito#salzburgfestival2017#salzburg#proudpic.twitter.com/BYWP5JkITi

A hug from Peter Sellars a day makes all your worries go away❤️ so much love from this man! Truly grateful to be here working SbgFestival</a> <a href="https://t.co/KAbcTaxjHq">pic.twitter.com/KAbcTaxjHq</a></p>— Jeanine De Bique (jfdebique) 22 juillet 2017

The annual Salzburg Festival became a fixture of the international classical music scene under Herbert von Karajan, who was its artistic director from 1956 until his death in 1989.

This year’s edition runs until August 30.