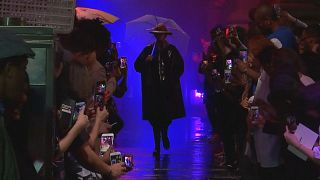 The Belgian designer chose New York’s Chinatown to show off his vision of the past for the future.

“‘Blade Runner’ has been inspiring for many years. I still wonder like why did I never, ever do something that relates to that movie after 22 years. But I think it needed to feel right in the circumstances. Because it’s a very filmic movie,” said Simons.

Maybe the song “seems it never rains in Southern California” was the inspiration for Mike Rubin. The US designer’s Krammer & Stoudt label combined casual cool with contemporary cuts to create a crisp and modern collection.