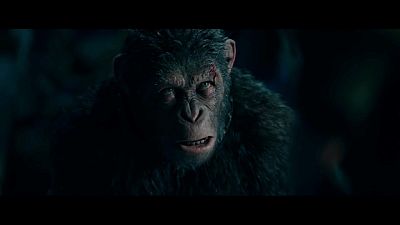 Ever changing motion-capture technology has made the simians even more realistic.

“In terms of the software and the understanding of how the actor’s performance is authored and the interpolation of that performance and how that’s brought to the ape’s face, that has changed, on the back end. So the rendering, the skin texturing and so on and so forth,” said Serkis who knows his way around the technology, having starred in the “Lord of the Rings” trilogy as Golem, and more recently as Supreme Leader Snoke in “Star Wars: The Force Awakens.”

Meet Bad Ape in the new clip from #WarForThePlanet. In theaters in 1 month. pic.twitter.com/xBgtQ93GOU

Director Matt Reeves said that using the technology is “a lot easier that you would imagine.”

“The actors are there,” he said. “The complex part of it is, once you shoot actors in their mo-cap suits, getting everything else you need in order to make those shots come to life, that part is really really hard. But the shooting of it, in terms of the actors is a lot more straightforward than you would think.”

War of the Planet of the Apes concludes the critically-acclaimed rebooted trilogy.