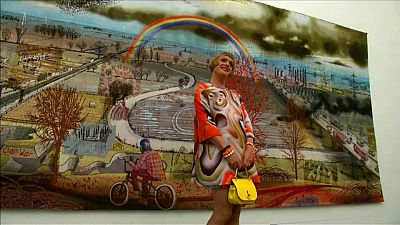 They say that art imitates life – and the old saw is certainly true in London at the moment.

British artist Grayson Perry has opened a new exhibition as voting got underway in the UK’s general election.

The works address political issues including the debate around Britain’s impending departure from the EU.

Perry says he is sceptical about artists who use political content in their work.

“I am wary of artists and I kind of mock artists sometimes for being political, because I think they borrow the power of political issues to give their art power which their art does not really have. In a way, I like to think most of the power of my art is in the visual thing, in the craftmanship and the composition and the colour and all the traditional things to do with art, but the politics are a bit of spicy, a bit of spice on it, to give it a bit of a zing.”

Perry is one of the UK’s most significant contemporary artists. He was awarded the Turner Prize in 2003.

“The Most Popular Art Exhibition Ever” is on at the Serpentine Gallery in London until 10 September.