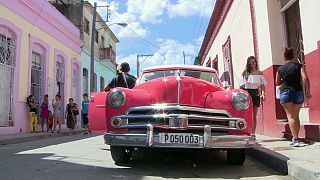 Restorer Carlos Chiong Cruz led us from there to an old colonial treasure he has helped to rebuild in recent years.

His taxi driver’s 1950 Dodge, fitted with an engine from a Russian Volga, drove some 30km north… There, behind an old railway tunnel, lies an unexpected beauty: the town of Gibara which celebrates its 200th birthday this year.

The fishing town once known as “Cuba’s best-kept secret” is being restored to its former glory.

Some ruins remain, but there are also renovated hotels such as “Arsenita,” which are part of a project designed to heighten Cuba’s appeal as a tourist destination.

“We are very much absorbed by creating new hotels of this kind. It’s an example of the effort that is being made,” Cruz explained.

To mark the island passing the four-million visitor mark for the first time in 2016, the annual FIT Cuba tourism fair held a special event in Gibara this year.

For over a decade, the town has hosted a film festival for low-budget productions. Until recently, it was called the ‘Festival of Poor Cinema’.

“He had the wonderful idea of bringing together these films and of calling the festival “poor”. But it is rich because it promotes the human being, and empowers people who love peace, dignity, and humanity,” Cruz said.

As well as beach resorts, the region has a rich culture of music and dance, such as the Afro-Cuban ‘Tumba Francesca’.

In the heart of the region, the city of Santiago de Cuba comes to life after sunset to show tourists and locals alike the sounds made famous by the late 90s film ‘Buena Vista Social Club.’

Off the beaten track

Tourist hotspots such as Havana or Varadero are already seeing a surge in visitors as Americans start to discover Cuba. But, off the beaten track, the east offers a different experience.

Outside Baracoa, the country’s eastern-most city, is Duaba Natural Park, where the focus is on ecotourism, as Alina Tompson Wilson from the province’s tourism board explains:
“Tourists come here to enjoy nature, the rivers, the beaches but especially also the human warmth of people here in the east.”

Juan Sanamé Ribero, a cocoa farmer showed us his trade. It’s a profession he learned from his ancestors and he has his own special theory about the success of cocoa.

“It’s the life my parents lived; it’s the same and I like it. And also, cocoa is an aphrodisiac,” he laughingly said.

Meanwhile, in Holguín, the annual ‘Romería de Mayo’ – May parade – was in full swing when we filmed. What looks like a carnival has its roots in a Christian tradition that was dug out and redefined by locals in 1994.

Cuba’s tourism authorities will make further investments in the east in the years to come, to attract more international tourists to this part of the Caribbean island.