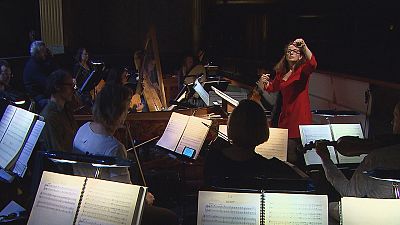 Emmanuelle Haïm conducts her own baroque ensemble, the Concert d’Astrée. She explains why each production of the Return of Ulysses is necessarily unique.

Emmanuelle Haïm, Conductor, Concert d’Astrée:
“When it comes to The Return of Ulysses to his Homeland, the manuscript is a copy which was not annotated by Monteverdi, and on which there is no indication as was the custom in those days. Nobody tells us neither which instruments play, nor what they play.“

“So, the conductor’s role, if you like, is very different from the role of a 19th century opera conductor, who will have to interpret a music with far more indications. Here, you have to make decisions constantly.“

“Therefore, you will never get the same musical choices, nor the same improvisations, of course.“

Emmanuelle Haïm, Conductor, Concert d’Astrée:
“_There are two foundamental groups of instruments, the “fondamento” instruments – which means the foundation of the orchestra. So, we have the viol (viola da gamba), the cello da braccio that you hold in your arms. And polyphonic instruments in charge of harmony: the pipe organ, all the lute family, from the small lute to the theorbo, which has very deep bass. _”

“_And then, you have all the melodic instruments, so the violin family, the cornet (also called cornetto or zink)…

…that almost belong to the brass family except the instrumentitself is made of wood but with a trumpet mouthpiece. Here are what compose – and the recorders (internal duct flutes – woodwind musical instrument) that I almost forgot – the instrumentarium of the 1630-1640 Venice._”