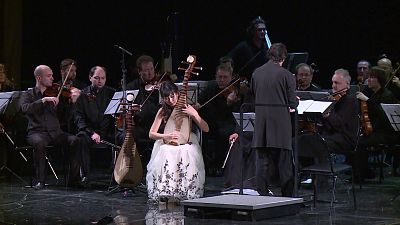 Traditional Chinese rhythms filled the Organ hall in the Russian city of Sochi as the Hong Kong Chinese Orchestra rehearsed.

The orchestra which was a special guest of the Winter International Arts Festival includes 85 musicians, whose mission is to preserve and promote Chinese music and old Chinese instruments.

“Usually we perform traditional melodies, but we also try to add a lot of creative ideas, to have a sort of combination. We work hard to enrich Chinese music, so people understand that it’s not old, it can be fresh and creative,” explained Yan Huichang, Artistic Director and ‎Principal Conductor of the Hong Kong Chinese Orchestra.

The orchestra, founded forty years ago plays hundreds of folk instruments like one called ‘zheng’. It is one of the most ancient. It has an almost 3,000 year-history.

“Zheng became really popular during the Tang Dynasty between the 7th and 9th centuries. Then only men played it. Now women are also allowed. My instrument is pretty new. But it’s almost a true copy of the ancient one,” said Luo Jing, musician.

There are some old instruments that were intentionally remodeled by the orchestra to create a new orchestral ‘voice’, and to make instruments more ecologically friendly.

The two-stringed musical instrument called ‘erhu’ was introduced to China more than a thousand years ago. But the orchestra modified the old version.

The Hong Kong Chinese Orchestra in Sochi Festival! A crossover performance with with renowned musicians from Russia. #sochi#HKCO#hongkongpic.twitter.com/0ue6Sq4gsB

The chamber ensemble the ‘Moscow Soloists’ joined the orchestra to play together which was a challenge.

“Of course, it’s tough to play together. There is a lot of similarities between us, but Chinese musicians hold instruments differently. So, the sound is totally different. But we’re trying to keep up to them,” explained Herman Beshulya, musician, Moscow Soloists.

Together they performed musical compositions of Chinese contemporary classical composer Tan Dun, proving that Chinese ancient instruments are not only for folk music.