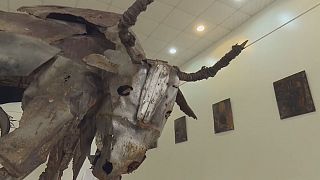 Artist Fattah Mohammed Fattah is using leftover parts of Iraq’s dark history to inspire new creations, animal sculptures made from leftover pieces of metal from tanks, shells and other reminders of war.

His gallery has just opened its doors in the city of Dohuk, north of Mosul.

Fattah says he wants to show that all the destruction caused by Iraq’s endless wars and all the rubbish that has been left lying around can be cleaned up and turned into something beautiful.

“This gallery is a message from me to the environmental organisations as well as civil society organisations to raise awareness of the remnants of war that we have been exposed to. Wars that have been imposed on us. In this gallery I tried to collect these remains and turn them into creative artistic pieces,” he says.

Parts of northern Iraq resemble a rubbish tip of war equipment left over from recent conflicts.

Abandoned tanks and armoured vehicles are silently rusting away by the roads around Mosul and in the deserts towards the Syrian border, many of them left behind by various militant groups or Iraqi forces after one clash or another.

“In these paintings, I used no paint. I used only the burning technique. Burning has become a phenomenon in our society because of the many times that the environment has been burnt here. And therefore I used the burning style for the paintings.”

Fattah calls his work environmental art and he is the first to admit these sort of pieces are considered new and unusual in Iraq, and provide an entirely different perspective on the legacy of war.