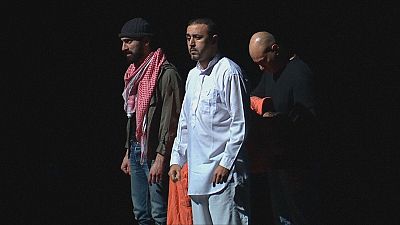 A play called ‘Jihad’ has been on stage in Brussels and France. It follows the odyssey of three young Muslims from the streets of Brussels to the horrors of Islamic State-inspired martyrdom in Syria.

Ismael Saidi, the stage director and writer of the play was born to Moroccan parents and raised in the Brussels district of Schaerbeek, which has faced radicalisation.

He has never been radicalised but was exposed to such views when he was younger. Some of his childhood friends went to Syria and he was approached to go to Iraq during the war.

“When you are young and someone tells you some truths you know and which are still happening it makes you think. What frightens me with jihad – and I think it’s really disturbed me since the beginning – is that I wrote a story which was supposed to take place 25 years ago.

‘It was not meant to be current; or to reach out to young people. And when the media says to me you were a visionary, I respond: ‘No, I was outdated. I wrote a thing of the past.’ What’s pathetic, is that it actually speaks to them,” he explained.

European jihadi fighters were involved in the Paris attacks that left 130 people dead and the Brussels bombings that killed 32 people but Ismael believes radicalisation and people drifting into the Jihad starts very early on.

A study in 2016 by the Netherlands-based International Centre for Counter-Terrorism found that French, Germans and Britons make up the highest number of foreign fighters from Europe in the Syrian rebel ranks.

“In fact, I wrote this play almost to say it’s okay, that’s enough now. I don’t want my children to know it. I know what it is to be born to foreign parents, from another country, and to grow up, mess around, listen to bullshit imams, listen to bullshit speeches, find rotten books. I know all of that, I know it. That has to stop,” he concluded.

“Jihad”, which was staged in Belgium for over a year before being put on in France attempts to analyse the causes of radical killing in the name of religion and tries to prevent it.

It has gained wide support in Belgium and has been recognised by French Education Minister Najat Vallaud-Belkacem as a tool to prevent radicalisation.