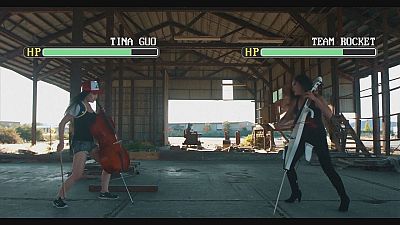 Cellist Tina Guo is taking video game music into the charts with her debut album, ‘Game On’.

The combination is unique. She showcases some of the most popular and well-known game themes with a classical twist. You have a choice of 14 tracks on the album which was created out of the 31-year-old’s enjoyment of playing video games.

“ I love video games and I love video game music. In the past I’ve also played, I’ve recorded cello – electric cello and acoustic cello – for different game scores like ‘Diablo 3,’ ‘Journey,’ ‘Call of Duty 2’ and ‘Call of Duty 3’ and some other various games. So, I thought it would be fun to actually do my own versions of these awesome songs,” she reflected.

Tina was just three years of age when music started to become part of her life. She began piano studies in Shanghai. Violin lessons with her mother followed at five after she had moved to America. Two years later she took up the cello with her father teaching her.

It’s not all music of course and she admits to being a bit of a video game ‘nerd’.

“ I do have to admit, I’ve been pretty busy with practicing, playing cello and stuff, but when I have time I’ll play ‘Pokemon Go,’ or ‘Tetris’ a lot on my phone. Usually when I’m travelling I’m playing ‘Tetris’ or whatnot,” she pointed out.

Now the album is finished its back to the day job with the cello.

She contributes regularly to Hollywood scores and has worked as a cello soloist with Hollywood’s top composers, including Hans Zimmer.

Guo’s album “Game On!” is released on Feb. 10. She will be touring worldwide from March 8th.