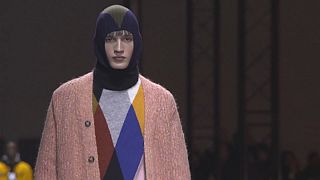 A cavernous warehouse on the outskirts of Paris as the big freeze gripped most of Europe was the venue for Kenzo to unveil its latest Autumn/Winter collection.

The theme of the new line was pretty clear – rawness and exposure, a sort of Hawaiian surfer in the Arctic.

The creative collection merged men’s and women’s designs and channeled clothes that would be worn in harsh environments and raw conditions.

That's a wrap! The KENZO Men and Women's FW17 show was inspired by a wardrobe that combines wild protection with an urban sensibility. pic.twitter.com/mjIQxmsk36

Rick Owens sent models down the runway in down jackets bunched up to look like balloon animals, at the Palais de Tokyo in Paris for his “Glitter” Autumn/Winter collection.

A statement from Owens the theme. It was inspired by the 1970’s celebration of anti-conformity and sexual liberation with the designs intended to be over the top.

‘Glitter’ refers to a period in the seventies celebrating sleaze, transgression, sexual liberation and anti-conformity with a stomping bombast.

It was about an almost grotesque artifice, rejecting fears in oppressively troubling times the statement said.

A touch of a political statement from Demna Gvasalia the creative director of French fashion house Balenciaga?

The logos that adorned the latest collection were not unlike those of Democrat Bernie Sanders’ electoral campaign in the US.

They were emblazoned on jackets, t-shirts and even a scarf draped over a model’s shoulders.

Aside from the politics of the collection, the most striking aspect of the show was the use of scale and layering.

Sweatshirts were worn over shirts, over hoodies, offering protection from the Parisian winter.

Bulky sports shoes were worn with everything. When coupled with suits they resemble an off duty look, or perhaps an outfit worn during a commute or on the way to the gym.