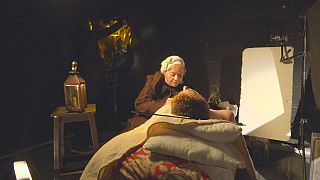 While Morocco only produces some 20 films a year, it is a prime destination for foreign directors looking for the landscapes and the technical talent at an affordable price.

Founded a decade ago, Marrakech’s School of Visual Arts has established itself as a leading film school in the region.

Inoussa Baguian from Burkina Faso is in his final year.

“Where do I see myself in five years? I see myself making films, because there’s still a lot to do, in the cultural field. We are increasingly aware, especially here in Africa, that culture will play a big role, be it economically or in the fight against extremism everywhere. Culture has an important role to play,” he said.

The school takes pride in the fact it offers students hands-on training, bringing in film industry professionals who carry out workshops throughout the year.

In this studio, a group of students is working on a very particular exercise under the direction of Belgian Director of Photography Michel Houssiau.

The objective is to recreate a 17th century painting by Francesco Cairo, ‘St Sebastien Healed by St Irene’.

“Our starting point with this workshop is not to give the students free rein, but on the contrary to take the painting as a point of reference and to say we are going to reproduce it, we’re going to reproduce this image, so there is the question of light, of costumes, of hair and of make-up of course, as well as the décor. The idea is to reproduce everything that’s in front of the camera lens,” he explained.

After studying here it is hoped the students will have the right tools to find a job in the industry when they leave.

“There are Moroccan films, which are made thanks to public funding, so there are about 20 Moroccan films made every year, which generates a number of technical jobs.

‘Then there’s TV. A number of series and documentaries are produced here every year, especially ahead of Ramadan, when people stay home and watch a lot of series, so that’s a busy time of year, and then, of course, there are all the foreign films shot here in Morocco,” the Director of the School, Vincent Melilli pointed out.

Among those foreign films which were shot in Morocco is Oliver Laxe’s ‘Mimosas’. The sound effects were finalised at the School of Visual Arts. The film won the Grand Prize at Cannes’ Semaine de la Critique earlier this year.

'Mimosas' - somewhere between a mystical road movie and a Western