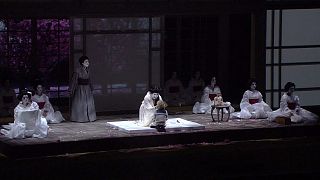 First performed in 1904 the original is in two not three acts and includes harsher language by the US naval officer who betrays his Japanese geisha.

The differences are said to enhance the celebrated work’s dramatic and shocking finale.

Conductor Riccardo Chailly said he chose to revive Puccini’s first take on the opera calling it a “duty” towards Puccini to present the masterpiece as he originally intended it to be experienced.

Unlike the 1904 production, which was greeted with hisses, the revived performance earned a 13-minute standing ovation.